The Danse avec les stars Tour 2016 is well past the half way already, only 10 shows left of the 28 shows during this tour. So far, it’s been wonderful. And what’s the best, I had chance to see it myself, too, in a few occasion. So, here is a small report what I saw and how I felt. More complete article about the tour comes once the tour finishes. If you wish, you can also read our articles of the first two tours: Tour 2013-2014 and Tour 2014-2015. The page for Tour 2016 is also up, and waiting for the last few shows to finish.

After seeing the first two tours, I was, of course, excited to be on this third one also. This time I chose to go to Brussels (Belgium) for my first show. The show was held in the famous Forest National music hall, which I have heard lots of good things, and the place really stand for my expectations. Another reason to go there was that there would be more shows just near by after Brussels. (I also saw the show twice in Lille during the next few days. Photos and videos from Lille comes later.) 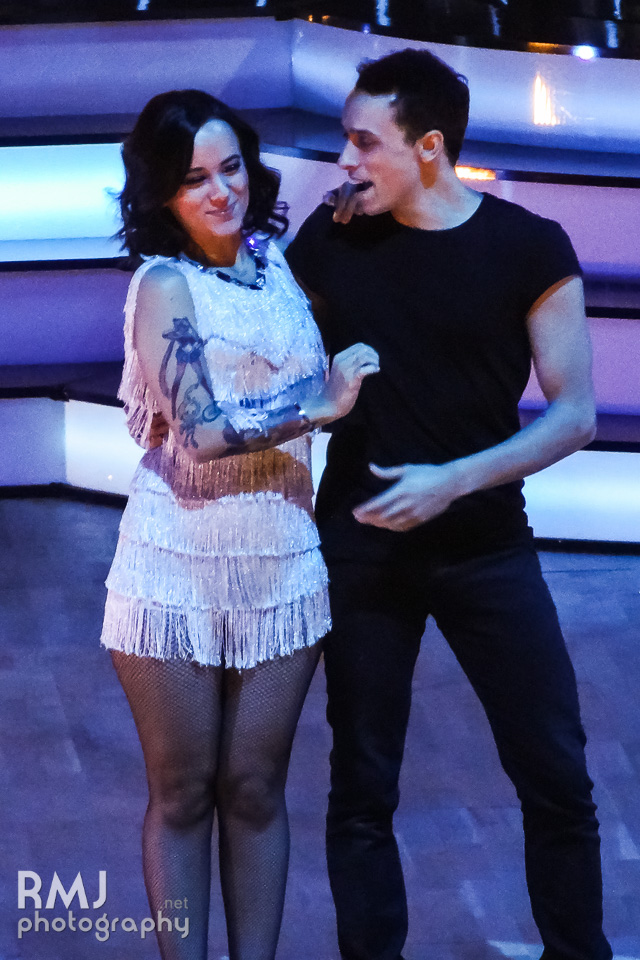 Alizée & Grégoire at the opening of Danse avec les stars spectacle in Brussels.

The show in Brussels was on 4th of February, at 8 pm (20:00), which is unusual as all the shows in France starts either at 5 pm (17:00) or 8:30 pm (20:30). Thankfully I checked the starting time and didn’t miss my show! I arrived the place half an hour earlier, and since there wasn’t too big queues outside, decided to drop by to café near by to have one beer before going in. Once I got in and found my place, it wasn’t long wait till the show started. I had pretty excellent view from “first” row, behind VIP seats. But unlike the VIP rows on the parterre in same level, my row was slight higher so I had equal view to the first VIP row.

The show started like before, the familiar theme started to play and the giant back screens turned on. The first dance started right away, with professional dancers. Among them you could spot Grégoire Lyonnet and many other familiar faces. After the dance, the hosts came on the stage and welcomed us to the show and started the presentation of the celebrities. I was anxious to see how it would go this time, as there had been lots of dispute since the beginning of tour. But I didn’t have to wait long, first came Fabienne Carat, after her Olivier Dion followed by Brian Joubert, and then… finally Alizée! She did get introduced with the others, unlike in the first two cities (Marseille and Nantes)… but I’ll come back to that later. Alizée was followed by Priscilla Betti and finally Loïc Nottet, who made the crowd go wild!

It was so nice to see her on the stage again, in a sparkling silver costume (I assume, could be white or pink too… the colored lights make it hard to tell always). She was sparkling, too. And smiling, of course. She clearly enjoys doing these shows and I’m happy that she found her passion. After watching her a while (and filming, of course) she had to run backstage and give room for the first couple to dance in the (not-so-serious) competition. I think it was Fabienne who started the show. 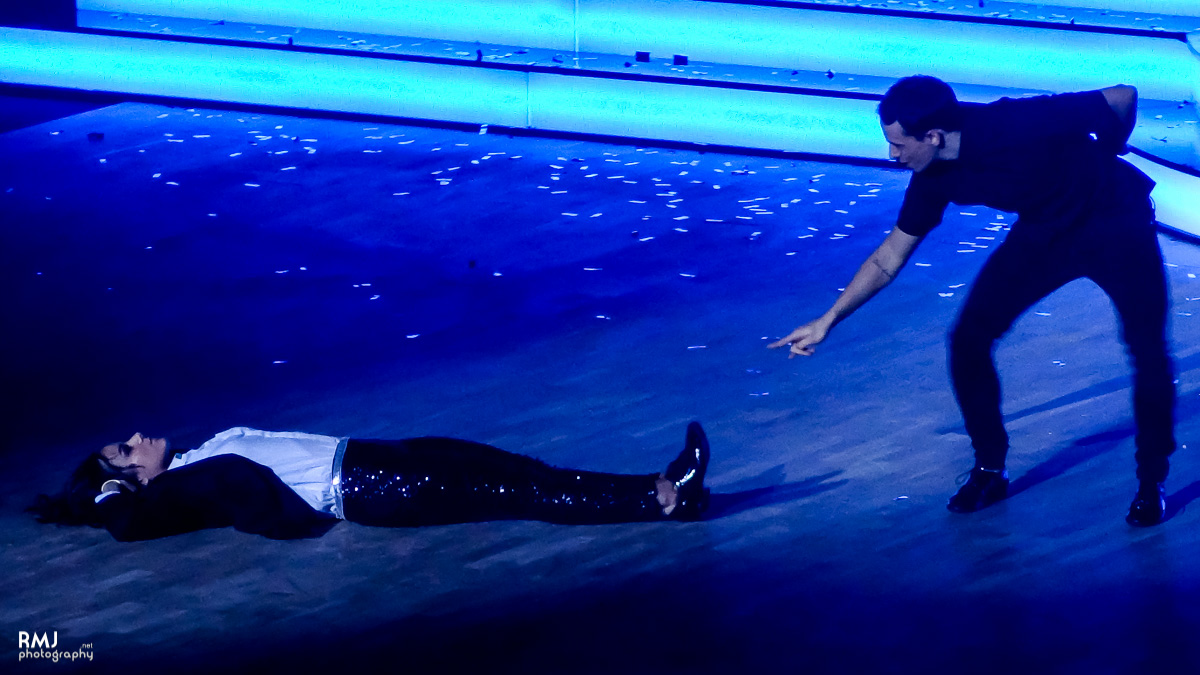 Alizée having a siesta during rumba.

30 minutes later, after three celebrity dances and few professional ones, the host (Laurent Ournac) finally announced something really interesting… The next couple to step on the stage would be Alizée & Grégoire, dancing rumba! Before they actually entered the stage, a small video was played showing the best moments of Alizée’s participation on DALS TV show on season four (2013), when she won the real competition with Grégoire. She was well received by the audience, I noticed that. After the video ended, the song started to play (Christine by Christine and the Queens) and the spot light hit our favorite couple. She is wearing her second costume of the night, sparkling black trousers, white collar shirt, black suite, and shiny black step dance shoes.

The next two minutes were pure magic, of course. This is why I came here. Even if it’s not my favorite dance (still can’t believe they replaced Charleston, which was one of my all time favorites), it was a pleasure to watch. Even more when you could tell how good she felt dancing. The dance ends with an interaction with the audience. At the very end, Alizée goes off the stage and sits on the lap of one of the guests in the VIP section. What a chance would be to sit there… After she greets the guest who happened to be there, she goes to judges for a microphone to thank the audience for the support. Unfortunately, that’s it. She wasn’t given commentary about her dance and the dance wasn’t rated like the other celebrity dances.

Here we come to the great debate I mentioned before. What’s the role of Alizée on this tour? It was very unclear at the beginning of the tour, as she didn’t even tell us she would be on it until just few weeks before. In the first show in Marseille, it was a big surprise when suddenly when it was time to vote for the best dancer of the show, she wasn’t available on the voting page at dals.fr (other than very briefly at the very beginning of the show). People started to tell that she wasn’t actually in the competition but there wasn’t any reliable info. Just before the first show in Paris, a magazine article was released (by Télé7Jour or something similar, can’t remember now) with a small interview with Alizée that little bit explained what was going on. Alizée told that she wasn’t interested being part of the competition and hence had joined the tour only as a guest dancer. But because of the injury of Tonya Kinzinger, just before the first show of the tour, Alizée was said to replace her starting from Paris. And indeed, she brieafly appeared on the voting site again in Paris during the first show only… and even in Paris, she didn’t have her second dance like normally would the competing couples have. Also, even if I wasn’t there and haven’t found confirmation yet, she didn’t get rated in Paris either. So, after all the mixed information coming from different sources, we were back to square one. She was just a guest dancer on this tour. Starting from Amnéville, she haven’t appeared on the voting page anymore. And, of course, now in Brussels, I could tell with my very own eyes (and ears, since in Lille the host even told it out loud) that she is definitely not part of the competition. It’s, finally, good to have a closure for this puzzle. No more sleepless nights because of it. 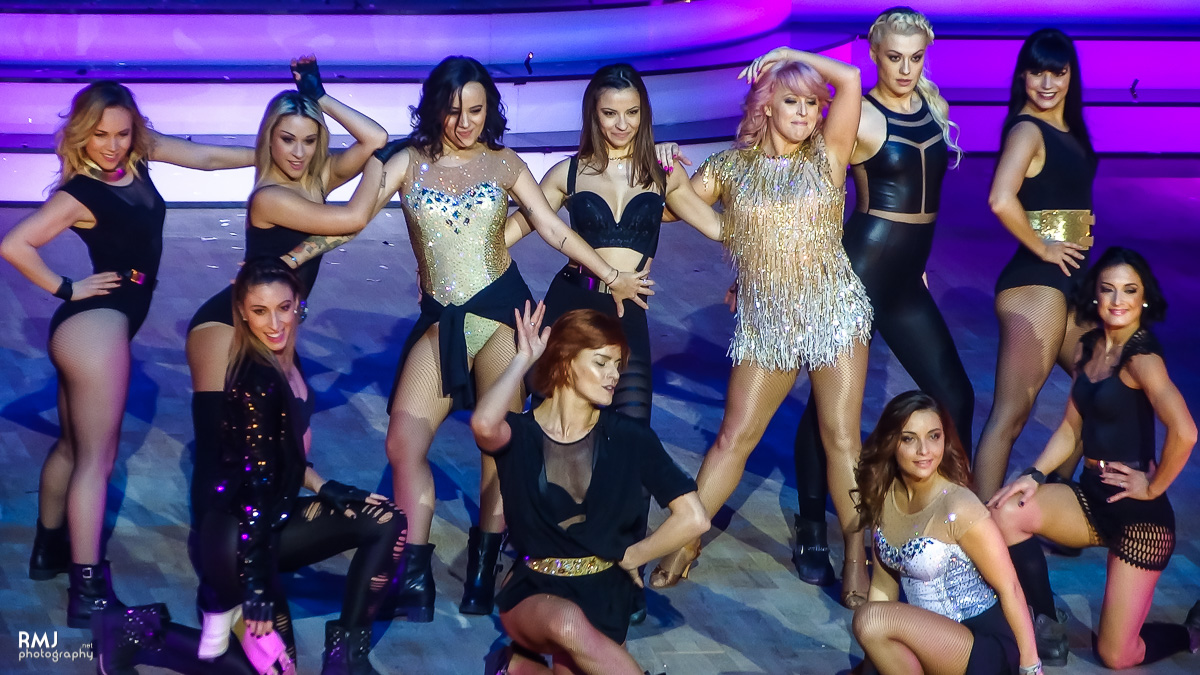 Well, competing or not, she’s big part of the tour, of course. Even though she only has this one dance as a solo couple, she has major roles in other group dances and small roles as background dancer. Just four minutes after this first rumba ended and she left the stage, a quick costume change occurs and she returns to the stage (btw, her world record of changing costume is still unbeatable… It happened in DALS Season 4 final after Megamix). This is the third costume for the night, this time it’s a sparkling gold dancing costume with black “skirt” tied on her hips. This time the dance was going to be all girls. At the beginning, Alizée isn’t on the stage but mid way the song she joins the other girls and takes place as lead dancer, replacing Jacklyn Spencer. It’s a cute little dance, and what’s more important, she’s in a big role in it. After another short break, she enters the stage again in the same costume, this time as a background dancer. Not very exciting role but nice to see her there, of course. This is the last time we see her on the first half of the show. 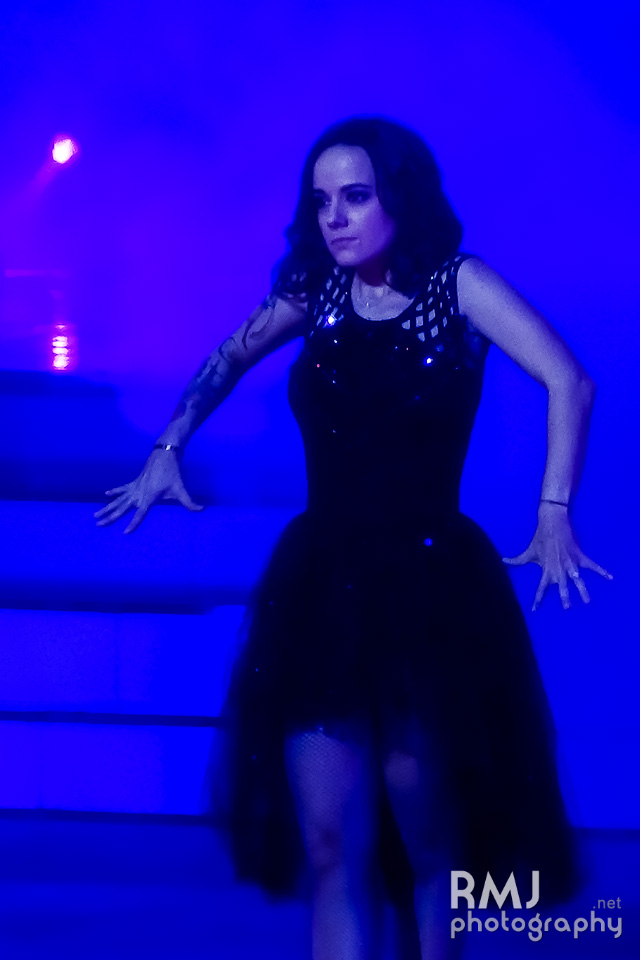 After 20 minutes break in the show, the second half begins with another round of the competition. As said before, Alizée doesn’t have her own second dance but she will appear sooner or later with a group dance. It’s actually sooner than you think, maybe 10 minutes from the beginning of the second half and you hear the theme song of Harry Potter playing, and Grégoire is on the stage playing Harry Potter(?). And before you can even start to wonder where’s Alizée, she appears on the stage in a black dress, much like the dress from her famous Black Swan performance. It’s not the only similarity to that old dance because this new dance is also contemporary dance, and it loans some moves from Black Swan, still being different enough. This is by far the nicest dance of the evening for her. It’s actually very beautiful, I enjoy it a lot. Unfortunately everything good ends, so she has to run back to the backstage again… 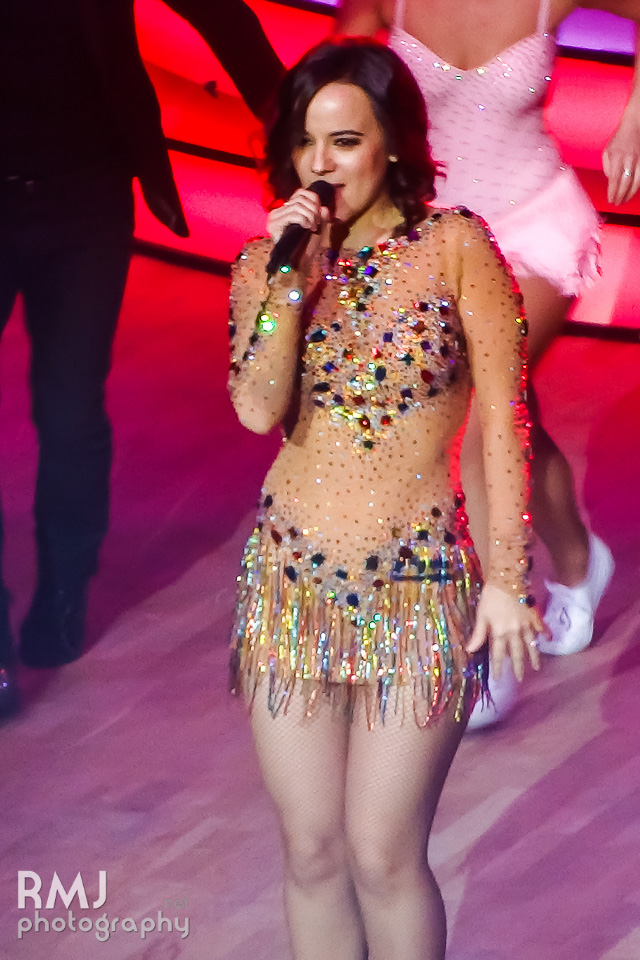 Alizée singing during the final of the show.

The next time we will see her is more or less the end of the show (unless I forgot some small background role). During the very last dance of the night, we get some live music. First it is Priscilla Betti who enters the stage singing instead of dancing. And once she is done, the big surprise, Alizée comes to the stage also singing! The song is Fame by Irene Cara. Not the easiest song for Alizée’s English skills but it’s not too bad. During bridge of the song, she makes small quick dance with Grégoire, before finishing the song.

After this, it’s time to say good bye to her again. Thankfully she will come back to stage and to greet the audience with all other dancers, host and judges. To give unforgettable memory for all who participated this, yet again, amazing night.

Then there is a silence… the show is over. 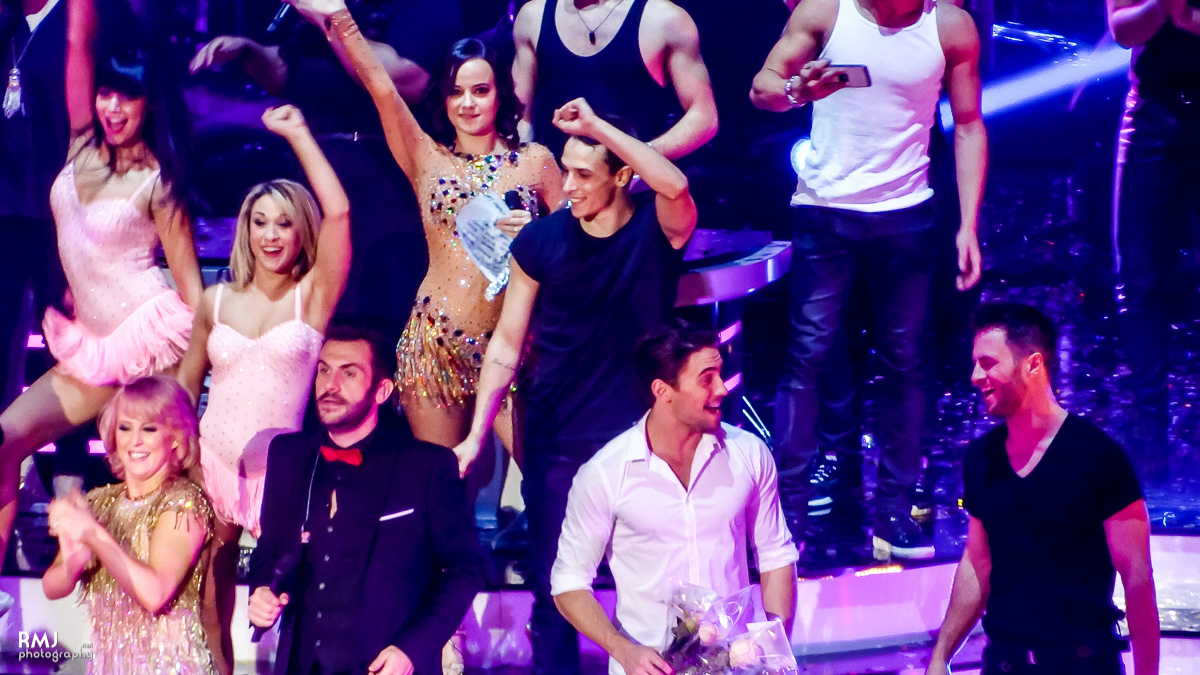 Time to say good bye! For a little while…

But thankfully for me, this wasn’t the end of it and I got to see two more shows in Lille, and where I got to be next to the stage for the ending. But I think I’ll skip that story for now, as this is already way longer than I expected to write. I’ll have to go through my photos and videos to refresh my memories, and write the proper article of the whole Tour 2016. But until then, I hope you enjoyed reading this and enjoy the few photos I can now share. I will upload videos online once I have time to cut them and see what’s worth posting anywhere. Follow our Facebook page to get instant updates of whatever is happening.

And, of course, if you are planning to go to see one of the next shows, have fun!


PS. Here’s a reminder of the upcoming shows where Alizée will be on: (the dates on darker background, she cannot attend for reason or another. 19th Feb was one of those, but apparently she is going to be there tonight after all):