On 3rd of April, Mona FM arranged a meeting with roughly 30 to 40 fans a meeting with Alizée. You could win a place for the meeting in various competitions during couple weeks before the meeting. The meeting was arranged at the Mona FM radio station in Armentières, near by Lille, in northern France.

The fans came well in time for the meeting. The meeting was at 16h00, and at 15h15 when I arrived the front of the radio station was packed with the fans waiting to get inside. Around 15h35 the fans who were on the winning list let to go inside and take their seat in small studio, with a small stage at the front. The stage was equipped with two seats, and a small table was added later when the autograph signing started.

I was first to go in since they wanted to meet me and make a small interview (part of it was released on “La Voix du Nord” newspaper. After the short interview I sit down in the first row to enjoy the show. Alizée came around 16h15 on the stage, smiling and waving to everyone.

The event started with short interview between the host and Alizée, this took roughly 5 minutes only. Once it was finished, it was time for the autographs. The fans lined up for it and had signed whatever they had bring with them to the event. Of course, a photo with Alizée was allowed for everyone. The event took a bit longer than expected so they had to rush it toward the end as Alizée had some promotion to do after this event also. The last fan to meet her was our other reporter, Gareth from London. It was his first time to meet Alizée.

After all the fans left, there was a small official photoshoot done for the Mona FM radio. It took only couple minutes in total, after which we all left the studio and Alizée went to backroom and we decided to find our way out, after thanking the staff, of course. Outside the station was again group of fans waiting to see Alizée to leave, and in no time she came out from the “backdoor” and walked into her taxi, waving to her fans and drove away. 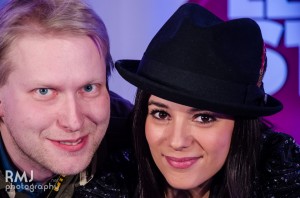 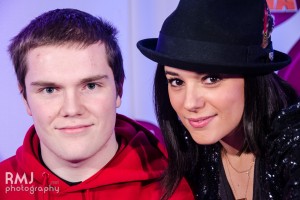