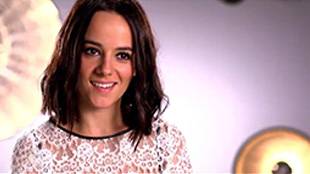 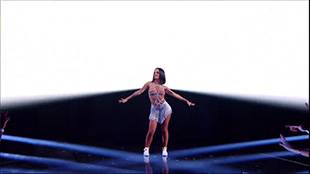 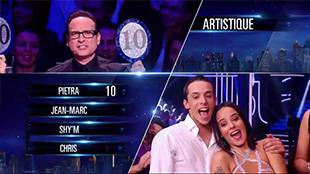 For week 8, Alizée‘s first dance was energetic jive. During practices Alizée was a little bit worried about this dance as it’s very physical and fast phased. Well, it sure was, but she and Grégoire Lyonnet manage to, once again, performn an incredible dance. The dance was perfectly synchronized with the background video (and music, of course) and as a bonus, she managed to pull off one old dance move from J’ai pas vingt ans, with four other Alizée’s on her side! For the music was chosen The Baseballs‘ version of Crazy in Love and it fitted quite well in the mood. Alizée’s dancing costume might have been the biggest disappointment this time. It was a rather boring silver dress.

Judges did like the dance a lot, especially Jean-Marc Généreux who went nuts after the dance ended. No wonder he gave full 10 for artistic impression. Also Marie-Claude Pietragalla was generous enough to give full 10. With 38 points for artistic view, puts the dance to second place out of all Alizée’s dances. For technical aspect, the judges saw some error in the dance (it really did have some errors) and finally received only 33 points. However, this was able to put their total scores up to 71 points which was enough to beat her “archenemy”, Brahim Zaibat. 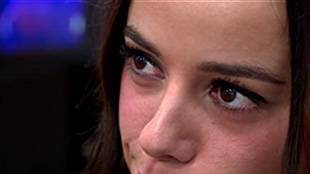 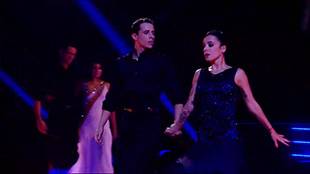 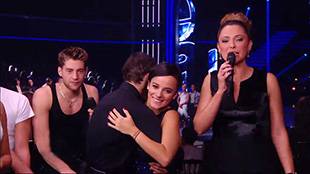 For the second dance, it was time for some foxtrot. Alizée dressed up in a long classic dark gown and was ready to dance again. The specialty of the dance was that they had to dance it with another couple, made up of professional dancers (Maxime Dereymez and Candice Pascal). They two couples must be perfectly synchronized for the artistic image. Alizée & Grégoire did excellent job with the dance, it was very beautiful and romantic play. Also the judges received it very well, giving out mostly nines for the artistic impression.

Of the technical aspect the judges weren’t that impressed and gave only 31 points total. Biggest hit came from Chris, who gave only 6 points. Their technique wasn’t bad at all, but maybe not perfect either. Either way, the overall dance was very beautiful and nothing to be a shamed off! Brahim was able to pull off 75 points from his dance, which put him to lead in overall scores after two dances. 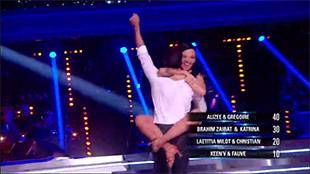 As a third dance for the week, there was a special dance called Dance Marathon (“Marathon de la danse”). This involved total of four different styles dances on four different songs. The styles were Cha-Cha-Cha, Waltz, Jive and Rumba. The couples would be eliminated one by one. Alizée changed back to her little black promotion dress for the dance to charm the judges. The first style, as expected, was very energetic and Alizée & Grégoire loaned a lot from their first week dance for this. They certainly won the judges on their side with this opening. After the music changed, Keen’V was kicked out. The second dance was Waltz, which was completely new dance for Alizée, and little bit bizarre to look at in her tiny outfit. This definitely wasn’t her strongest dance but she managed with it. The music changed to jive, and not long after it was time kick out Laetitia Milot.

Like always, the final battle would be against Brahim. For the jive, Alizée was, of course, in strong position as she had already danced jive earlier the night. And it clearly was very strong dance for her. After Laetitia was out, music changed to rumba. Once again it was clear that Alizée & Grégoire loaned moves from their second week dance. This was their third time dancing rumba and they managed to pull off beautiful performance. However, at the very end Grégoire had a misstep and fell on his back. Alizée was leaning on Grégoire with full weight and had no chance to stop either one from falling so he landed on floor on Grégoire. This was the first incident during the season but thankfully it was quite harmless. They both got up quickly and continued dancing like nothing had happened. Few moves later judges announced Brahim & Katrina… to be out! Alizée & Grégoire won the Dance Marathon!

The win gave them 40 extra points (30 for Brahim) and this was enough to put them back on the first position in the final scores! Total off 177 points against Brahim’s 173 points. 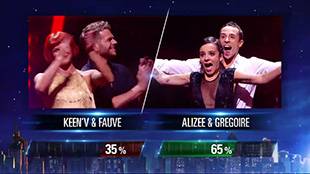 Against all the odds, and against all the fairness, the worst nightmare became reality. Alizée did not go directly to the finals… She would have to dance against Keen’V on Face à Face. The surreal situation was possible because the final results depends greatly on public audience and Alizée just didn’t get enough votes this week. This was what we have been afraid of and now it was happened… At the worst possible moment, in semi-finals…

The dance style was salsa (another new for Alizée) and song was A nos actes manqués from M. Pokora. The dance had several clear errors but at this point only the audience votes would matter anyways. She did her best anyways and managed to pull off a believable latin dance with few very nice moves. But the true nail biter would be just ahead. The results…

Alizée was really, really nervous. I have never seen her like that. She tried to smile a bit but it was clear that she had nothing to smile about. Same could be said of any of us… You could cut the tension with a knife when the final scores started to rise. For Keen’V the bar stopped 35% (of audience votes) and for Alizée it continued to rise, until at about 57%, they finally realized they had won! No acting was needed, she was happier than ever before, she would go to the finals!

First backstage video (from Les Coulisses internet broadcast) shows Alizée’s interview after her jive performance. She was quick enough to put her foxtrot outfit already on before giving the interview. The second video has an interview after Foxtrot, plus some random small bits from the backstage. 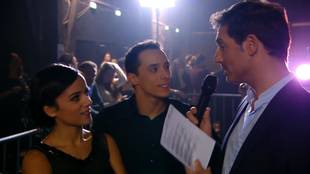 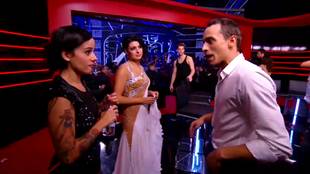 On week 8, we finally had the chance to see Alizée & Grégoire on live chat. They were the very last couple to hold this chat. Thankfully they did survive this far! The first video of the two is just a teaser for announcing the chat. The second video is the full 30 minute long live chat. People were able to send questions through Facebook, Twitter and TF1 website. 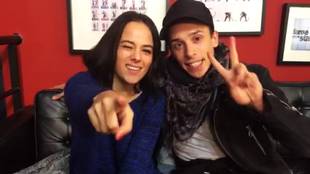 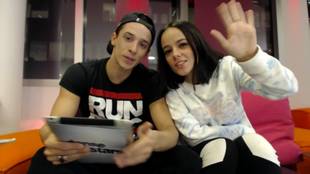 On the eight week, Alizée will have to learn jive and foxtrot. On the first bonus video Alizée finds out that the semi-finals will be a child’s play. Well, kinda… On the second bonus video Alizée is a bit down, stressed of the hard work and the pressure of the competition. On the third video Alizée finds out that she will have to learn foxtrot, and not just with Grégoire… They will have another professional couple (Candice & Maxime) to dance with them! They will have to be perfectly synchronized! On bonus video four, Grégoire takes Alizée to a Corsican restaurant where he gives to her a surprise gift: a drawing from her daughter Annily, and a audio message! In the restaurant is also a Corsican musician playing traditional Corsican music. 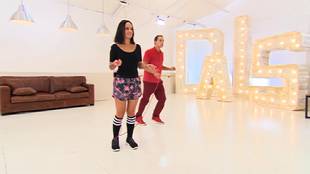 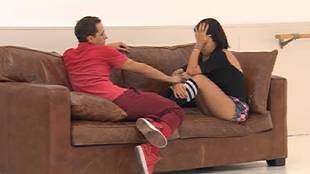 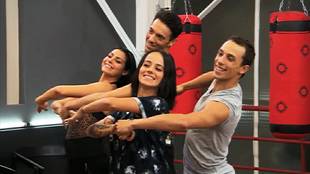 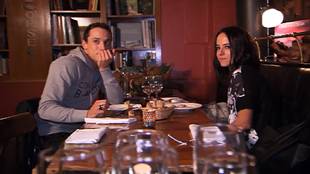