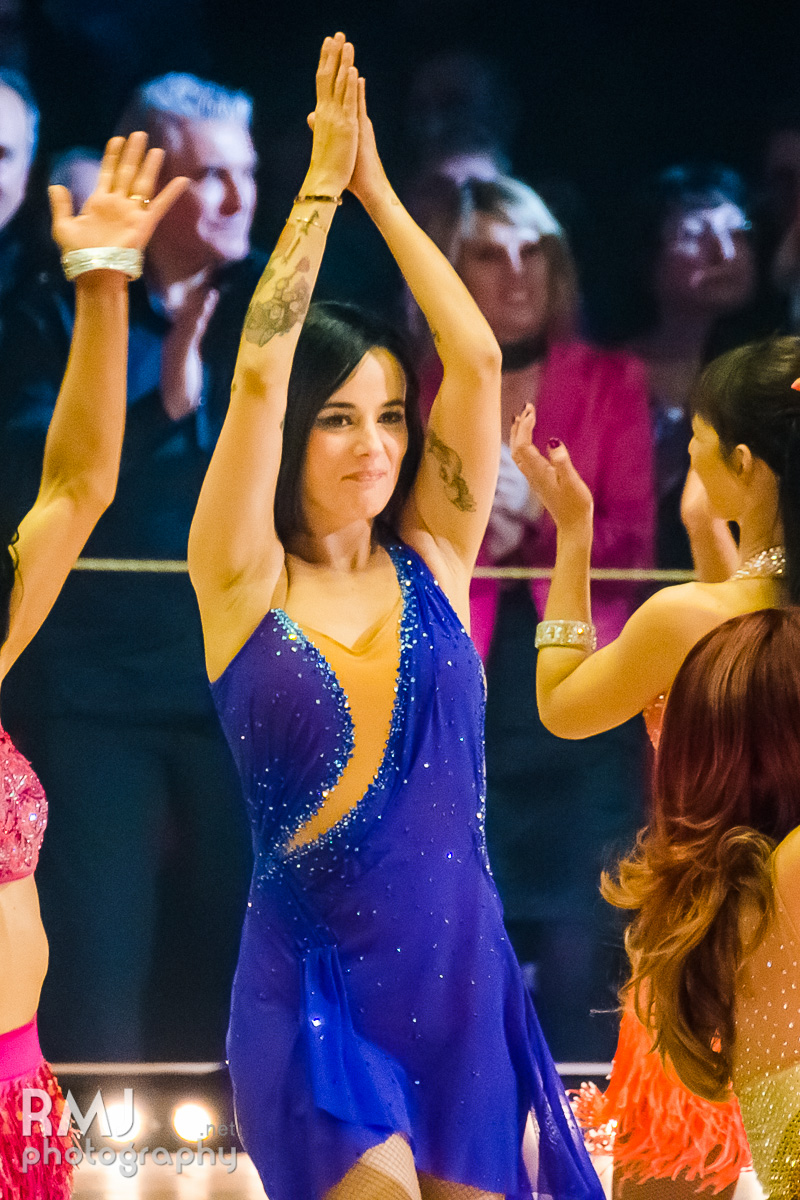 After the success of the first Tour 2013-2014, TF1 decided bring back the tour for another round. The dance tour is based on the TV show on TF1 channel, called Danse avec les stars. The TV show the French version of British Strictly Dancing format (Dancing with the Stars in US).

This time the tour has 28 shows, seven more than on the earlier tour. Like last year, one of the shows were held in Brussels, Belgium. Also, this time first two shows arranged for Nice were private shows hosted by the Mayor of Nice, Christian Estrosi. Sadly, the second private show had to be cancelled because of the unfortunate events that took place in Paris on 7th of January, due to the Charlier Hebdo shooting. After the events, each Danse avec les stars show started with “Je suis Charlie” text on the big screen to honor the victims. Later during the tour, DALS returned to Nice, for Carnival of Nice, and for replacement show for the cancelled one.

Alizée obviously was paired with Grégoire Lyonnet, her current boyfriend. They met during the season 4 of Danse avec les stars and fell in love. The other professional dancers this year are Denitsa Ikonomova (for Rayane), Christophe Licata (for Nathalie), Katrina Patchett (for Brian), Maxime Dereymez (for Tonya), Guillaume Foucault (for Louisy), Katrina Patchett (for Brahim), Candice Pascal (for Damien) and Silvia Notargiacomo (for Gérard).

The judges remained the same as on the last tour, lead by Jean-Marc Généreux and Chris Marques. The third judge Chris’ life partner Jaclyn “Jackie” Spencer (with whom Chris is the championship of salsa). The role of the judges remained also the same, to give notes that didn’t really matter for the “competition”. The winner of the show is selected by public voting. Unlike on last tour, this year the public was done through website (on first tour voting was done by SMS).

The opening show was held on 20th of December 2014 at Le Zénith Nantes Métropole in Nantes (Brittany). After usual, the show had a small holiday break and continued 6th of January in sunny Nice. This time Paris had to wait her turn all the way to the end of January, first show was held in Le Zénith de Paris on 30th of January.

Alizée dominated the last tour but the beginning of this tour was much more even. By the midway of the tour, Alizée and Rayane were fighting head to head for the victory of the tour. After the first show in Paris, which Alizée won, the tide changed and Rayane started his run for victory. Rayane finished the tour with 19 victories, while Alizée on second place managed to get 6 wins, last being the one in Paris. Nathalie was left third with one victory, and tied to her was Gérard who managed to get one win at the very last show in Rouen.

For the first dance Alizée and Grégoire had chosen Jive, danced on the beat of Taylor Swift‘s Shake It Off. It’s was very upbeat and fast dance, with tiny bit of comedy and interaction with the audience. For the second dance they had chose to dance a slow and romantic contemporary dance, maybe to express their love. The music was Wasting My Young Years by London Grammar. To get better idea of this years show, we recommend to read RMJ’s summary of Paris shows: Danse avec les stars Tour at Le Zénith de Paris .

Top-3 of the Tour